Our partecipation at Biennale di Architettura in Venice has been quite unexpected.

We must thank Eugenio, a young architect who used to be an apprentice in our workshop, and currently works for the German architectural firm Ciriacidis Lehnerer Architecten based in Zurich. At the beginning of 2014, Eugenio contacted us on behalf of his employers as they were looking for a furnishing company to produce some pieces for the German Pavilion at the next Biennale di Architettura in Venice, directed by Rem Koolhas. What a wonderful chance!

The request was to reproduce part of the furnitures of the Chancellor’s Bungalow placed in Bonn inside the German Pavilion of Venice. Their aim was to put in strong physical relation the two buildings and the styles of the historic periods they represent. The task for us was challenging but immediately we loved and shared the passion of these architects for the project. We found a special affinity with them and we literally fell in love with this project!

The opportunity which has been given to us a is a great honor, a reward for the huge passion and love we have been giving to this job and the projects we have been undertaken in all this years.

We are very proud to be the only Italian company in charge of the furniture's making for Bungalow Germania which is a great project by Ciriacidis & Lehnerer for the German Pavilion of the 14th Biennale di Architettura di Venezia.

This year, the 14th International Architecture Exhibition, titled Fundamentals, directed by Rem Koolhaas and organized by la Biennale di Venezia, chaired by Paolo Baratta, will open to the public from June 7 through November 23.

More than sixty National Participations will be exhibiting in the historic pavillions of the Giardini, the Arsenale, and the city of Venice. The pavilions are independently managed by the participating countries and their presence is a unique prerogative of la Biennale di Venezia.

If you want to see our installation please come and visit us at:
Bungalow Germania – German Pavillion at the Giardini

Notes by the Commissioners

“We were very fortunate to have been able to work with ermesponti. At first we were quite concerned about how to rebuild the Chancellor’s Bungalow in Bonn from 1964 here in Venice. Then, only by chance we met Daniela and Paolo.”

“There was so much care and love involved that we almost feel guilty that after six months of the Biennale everything has to disappear again. But before that you should go and see the exhibition yourself and how precise all the ermesponti furniture is crafted in the Pavilion. We even started to tell people there: if they wanted to see how everything looks in 50 years, they should go to Bonn!”

Read the whole letter on our blog

The Kanzlerbungalow is the former German Chancellor ‘s residence, in use at the time of Bonn capital of the Federal Republic.

It is situated in the park of Palais Schaumberg and overlooks the Rhine: the building is so well-integrated with those beautiful sorroundings and as well as the fact that it can not be seen by the general public, that not many people are aware of its existence.

Built in 1963/1964, it is one of the German post-war period’s most significant buildings. The building served as private residence and reception of heads of state from allover the world.

The bungalow was indeed very much an idea of Ludwig Erhard – the second German chancellor after the Second World War – and it was designed and built by his architect, Sep Ruf.

It was dismissed as official residence in 1999 and after an extensive renovation, since 2009, it has been used for exhibitions and other purposes.

Architecture as a self-portrait

Ludwig Erhard’s vision was not only modern but also prophetic. He decided to move on from the ancient historic buildings to the new glazed pavilion, built in the park nearby. There were no more monumental facades, no more big halls and luxurious old fashioned rooms, but sobriety and transparency led the way.

He chose a modern house in a perfect Mies Van De Rohe style. The building, which is now used for exhibitions, has a great layout with two blocks – one for private spaces, one for public ones- which encircle two different patios. Glazed walls underline the transparency of the then new German chancellor after the war.

In this way, architecture was the most authentic portrait of the public figure who lived in it. Here Ludwig Erhard welcomed kings, queens and prime ministers from all the countries of the world giving them an amazing lesson about the new values that had to inspire European countries.

After our thorough survey in Bonn at the end January, we started to produce the 5 pieces of furniture of the original bungalow in the first week of February.

As in every tailor’s shop, we started with the selection of the clothes: Ermes Ponti in person chose a couple of cut trees – two pieces of amazing walnut and stunning rosewood – and we showed them to the architects for their final approval. They were astonished by the quality of the veneer: it was even higher than the original!

In only one week we prepared the composition of the veneer for each piece of furniture. When we say custom made, we really mean it.

Meanwhile we cut all the panels. In two working weeks the 5 pieces of furniture were almost finished. We organized a phase of pre-installation in our workshop to check that everything was perfectbefore the furniture was delivered.

After that important check, we varnished the furniture in the middle of March. We decided to give a natural varnish – which was quite mat – to leave the wood as naked as possible. On Wednesday the 26 March the furniture was ready for Venice.

We managed to install all the German pavilion furnishing in one single working day. We were pretty sure it was possible, but even the architects on site could not believe it. There were several companies working together at the moment and they were quite worried about it.

They found some irregularities of the German Pavilion’s structure – a building dating from the last century – that especially involved the floor and the inclined walls. But our team is used to work in those kind of situations and to solve all the problems of the building to achieve the perfect adaptation of the furniture to it. You know, it is like a bespoke suit; everything must fit perfectly!

Our team allowed the architects to reach the desired outcome of their project by assembling, dismounting and adapting furniture to the building all day long. It was almost midnight when finally, after almost 16 hours of work, the installation was complete. The architects now were highly satisfied. Only with the last touch of ermesponti’s furniture their idea of blending those different buildings together is perfectly materialized.

And now, even the most unaware visitor can do a very simple comparison between the two styles that they represent: the German architectural history is crystal clear for everyone now!

Do you want to see more projects? 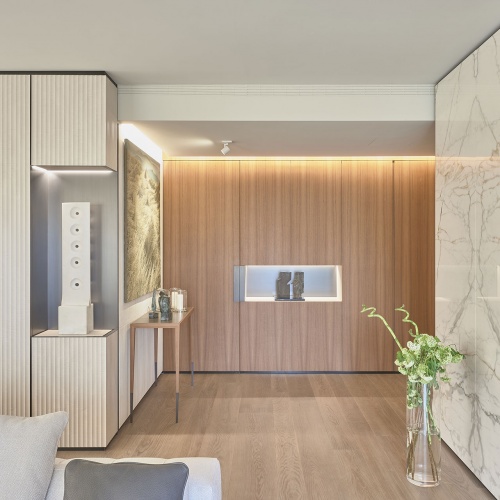 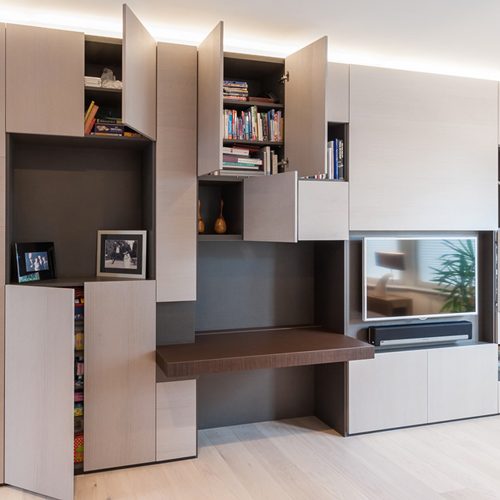 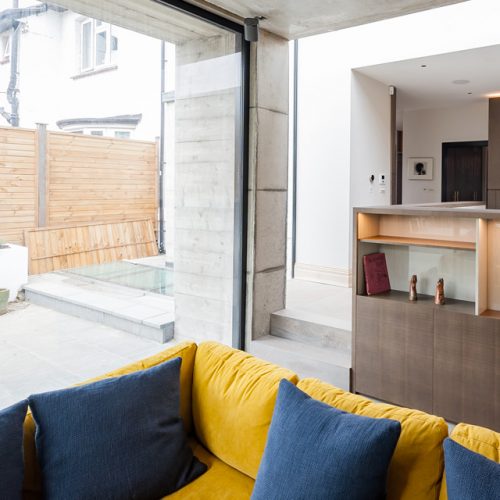 Our end-to-end method
but step-by-step for you.